Sonography is quickly rising as one of the major sought-after careers. The US Bureau of Labor Statistics  estimates that employment opportunities in this field will grow by 19 percent in the years between 2018 and 2028, which is huge compared with many other career paths.

A sonographer is more likely to be hired if he or she completes certifications or gets relevant training such as through interactive simulations.

Read on to find out more about this career path and how lucrative becoming a Sonographer can be in Texas.

The Role of a Sonographer

A sonographer is a healthcare specialist who deals with capturing relevant images of the human body via an ultrasound device. He or she helps in crucial diagnostics involving pregnancies, cardiac ailments, cancers, and much more. The sonographer prepares a report based on the ultrasound images to aid the physician in diagnosis. A sonographer is, thus, an essential link between a patient and the doctor.

Although the sonographer does not diagnose the medical issue by themselves, their accurate understanding of the human anatomy often enables them to pinpoint a specific organ or area of the body that needs further attention. This knowledge assists them in capturing the relevant images from specific angles, which provide further clarity in the documents they prepare for the physician’s and the patient’s perusal.

How to Become a Sonographer?

Medical sonographers typically complete a 2-year associate’s degree but some colleges provide a 4-year bachelor’s degree as well. Another way to become a sonographer is through a shorter certificate program, with accelerated programs being as short as 12 months. In general, certificate programs are offered at technical and vocational schools, while degree programs can be found at a college or university. Sonography programs are usually accredited by an organization such as the Commission on Accreditation of Allied Health Education Programs (CAAHEP).

Students who graduate from accredited sonography programs are eligible to take certification exams offered by the American Registry for Diagnostic Medical Sonography (ARDMS). Although certifications are not a legal requirement at present, many employers do require registration.

Advanced certifications could also give you an edge over your peers. Opting to get certified in a specific field of sonography, for example vascular, obstetrics/gynecology, pediatric sonography, or cardiac ultrasound, could help you in finding employment at specialized healthcare centers with higher pay. Your eligibility for taking these certifications will depend on the type of program you have studied and further training that you undertake.

Self-learning courses for specialist topics such as vascular sonography or echocardiography (aka cardiac sonography) are also a great option, since they can be done at home, without needing time away from work.

Should You Become a Sonographer in Texas? 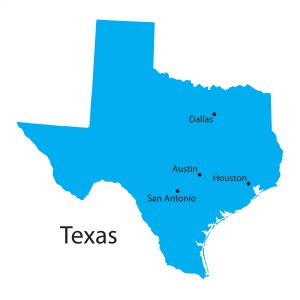 Texas is becoming one of the top states to kick-start your sonography career. It is also a great place to advance your career if you already have some experience in the field. This is because recent data shows the average annual salary of a sonographer in Texas to be around 65,000 USD. Of course, your salary could vary based on your knowledge, education, and your previous experience, but employment opportunities for this domain are generally on the rise in Texas.

This is augmented by the fact that Texas is the second most populated state in the country, comprising 8 percent of the total US population, only slightly below California which stands at 12 percent. Even then, the cost of living in Texas is cheaper than the US average, which makes it favorable for you to relocate, especially from other expensive states such as New York, New Jersey, California, Massachusetts, and so on.

The city in which you find a job as a sonographer also matters. Houston, Dallas, and San Antonio are among the top ten most populated cities in the US, with New York, Los Angeles, and Chicago occupying the top three positions. which makes them active areas for employment.

So what are the average sonographer salaries in Texas? Let’s talk about the biggest cities first.

As a diagnostic medical sonographer in Dallas, you may earn an average salary of 75,000 USD, while in Houston, your earnings might be even more at an annual average of 77,000 USD. In Austin, however, the average annual sonographer salary could be a bit lower at 74,000 USD. It is great to move into big cities, but you should be aware of the higher living costs.

While the cost of living is higher than the national average in Austin, the cities of Dallas and Houston are slightly more affordable. Their cost of living index is in the 90s, which is significantly less than Los Angeles or New York where the same index is more than 130.

If you get a job as a sonographer in one of the smaller Texas cities, your salary could be less but so would be the cost of living. In San Antonio, the average annual salary could be around 73,000 USD, while in El Paso, it could go down to 66,000 USD. Relocating to Amarillo might offer you an average annual salary of 69,000 USD while the city of Tyler might bring you about 68,000 USD. Both San Antonio and El Paso rank in the 80s when it comes to the cost of living, hence they are great options for relocating.

A career in sonography can be a remarkably rewarding experience. The advancement prospects are good too, because experienced sonographers have the option of branching out into other fields such a technical consultation, management, product sales, teaching, and even research. What you need to do as a first step is equip yourself with in-depth knowledge through an accredited program to get your career as a sonographer right on track.

Or if you’re already fresh out of college and looking for a healthcare career in Texas, or you have experience as a sonographer and want to move to Texas, you could always take up an online course to help you keep your knowledge fresh or cross-train into new areas, so you can secure a better job in this field.

Either way, with Texas being an active market for the sonography profession, your knowledge and/or experience could help you find the job you love in one of its top cities.

SimTutor's flagship health product is SIMTICS, a library of simulation-based content which enables cognitive learning & testing of medical, clinical and allied health skills anytime, anywhere. Its multi-media cognitive simulations are integrated with 3D anatomy, quiz, video and text, putting all the resources the learner needs in one place, at their fingertips. Like an online “flight simulator for clinical procedures”, SIMTICS de-risks the learning experience and allows learners to practice and rehearse as often as required to build competence and confidence.